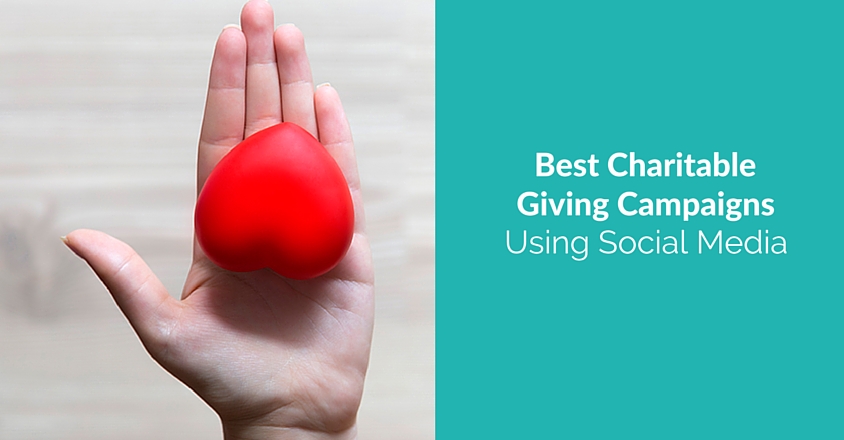 Have you noticed the rise of brands implementing social media charitable giving campaigns or, as some may know them, “share-to-donate” campaigns? It’s no big surprise. After all, sharing on social media is what people love to do most. When you combine that with a good cause, you’ve usually got a recipe for success. Right?

Well, maybe or maybe not. While it’s true that this type of social media campaign could present a huge opportunity for your brand and your chosen charity, it could backfire on you and generate the wrong kind of buzz if not executed thoughtfully. 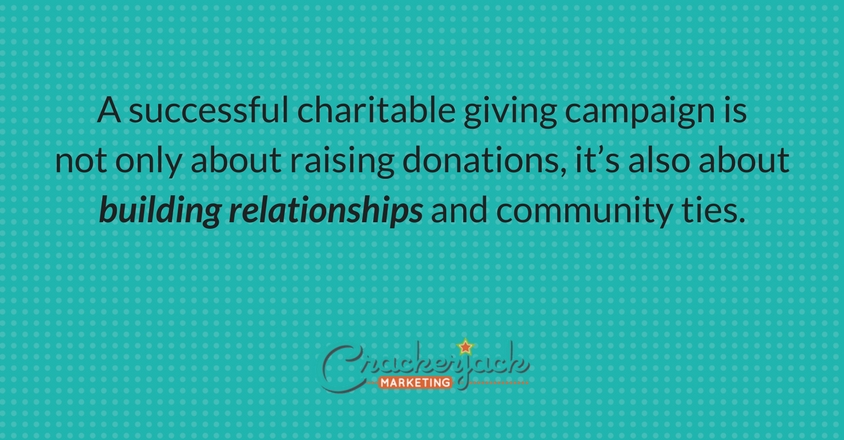 What is a Charitable Giving Campaign?

First things first. Before we go too much further, let’s explain what we’re talking about when we say “charitable giving campaign.” Even though the term “charitable giving campaign” may sound like the brand or charity is soliciting donations from participants, they’re not. What many brands are doing is asking their community to take a specific action and for each action, the brand will donate a pre-determined dollar amount to a particular charity.

The most common action involved is usually based on some form of sharing. This may be sharing a Facebook post from a brand page or a video, or it may be asking fans to share a picture of themselves or tag a friend in social media.

For example, a brand might ask their fans to post a picture of themselves, accompanied by a specific hashtag. For each picture posted, the brand would donate $1 to a particular charity.

After uploading the image, participants were asked to choose from a selection of four charities, including ASPCA, Make-A-Wish, Meals on Wheels, and the National Park Foundation, for Subaru to donate $250 to on behalf of the participant.

This campaign was successful because of the significant donation amount, and the freedom given to the participant regarding the image they shared, and the charity they chose. 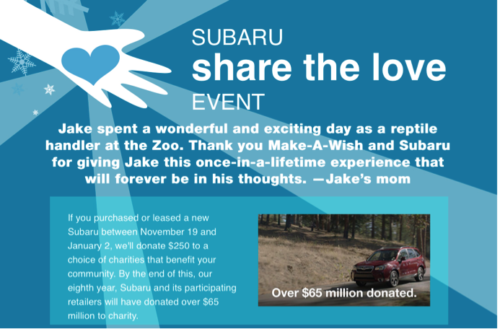 In 2015, Coke created a video highlighting Special Olympics participants and events, as well as a song created for the Olympics. Coke encouraged their fans and followers to share the video using the #ReachUp hashtag.

Moving and inspiring content is what made #ReachUp successful. Coke’s audience felt a connection to the video as well as to the Special Olympics, so they felt the desire to share the content. Coke put the focus on the charity, not the brand; this was sharing made easy and heartwarming. 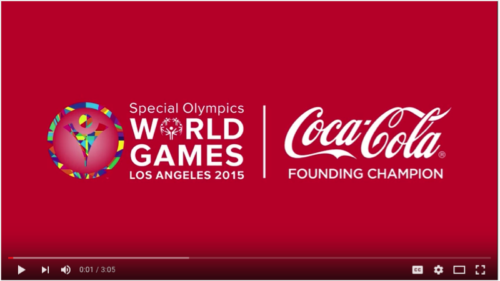 The Kellogg’s Share Breakfast campaign asked fans and followers to share the information about the campaign using the #ShareBreakfast hashtag to their choice of social media channels. For each share, Kellogg’s donated one breakfast to Action for Healthy Kids. With over 1.5 million breakfasts donated because of their social media campaign, we can certainly call this a success.

Kellogg included a “celebrity dad” (Taye Diggs) as an influencer and created a microsite where the participants could learn about the campaign and included a large call to action and easy social sharing buttons.

Disney celebrated their 60th anniversary by asking their fans and followers to “share their ears” (by wearing or making their own Mickey Mouse ears, or creating ears with their hands) to their social channels using the #ShareYourEars hashtag.

Disney encouraged participants to be creative in their entries. They also created meaning by partnering with the Make-A-Wish Foundation, one that many people care about and support already. The foundation also heavily promoted this campaign in return. 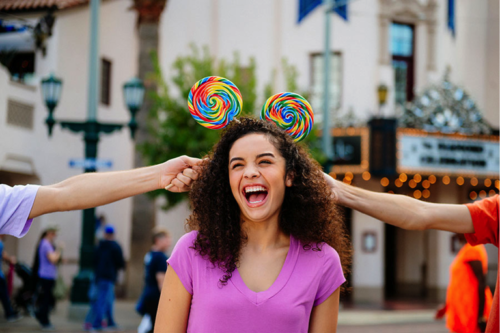 Is a Charitable Giving Campaign Right for Your Brand?

Did any of these examples get you thinking about starting your own share-to-donate campaign? We hope so! This type of campaign will allow you to partner with a charity that resonates with your brand and your community for a great cause. It will get your company involved, the charity involved, and your community involved! Who doesn’t love scrolling through Facebook, and supporting a good cause at the same time?

A successful charitable giving campaign is not only about raising donations (although that is important), it’s also about building relationships and community ties.

Above, we highlighted four great examples of charitable giving campaigns using social media. Now that we’ve (hopefully) inspired you to start your own share-to-donate campaign, we want to share our best practices from these campaigns so you can implement them on your own!

There are so many good charities that can use donations. It’s important to choose one that resonates with your community and also aligned with your brand. Yes, the idea of rescuing baby kittens may pull at your own heartstrings, but it doesn’t make sense if your brand isn’t tied to kittens or animals in any other way.

Disney’s Share Your Ears campaign is a great example of a fantastic brand/charity match up. Disney has partnered with the Make A Wish Foundation in the past, and what do they have in common? Making dreams come true. Magic. It’s the perfect match.

Subaru also had a great idea: Sometimes it’s hard to narrow down which charity you want to work with, so they chose four different charities and invited the participant to choose which charity who would be the recipient of the related donation.

Apart from choosing the right charity, this is the single, most important aspect of your charitable giving campaign. Don’t be a cheapskate here!
Make sure your total donation amount is significant enough to make a difference. It should also be related to the complexity of the action you are asking your fans to take to trigger the donation. The harder the action, the more money you should be donating.

A simple post like or post share, or maybe event an easy Twitter update, should equate to at least $1 for the charity. Asking someone to take a picture of themselves doing something specific? That’s a harder task and the donation amount should be more. In other words, if you want someone to do something more than click a like or share button, you have to make it worth their while.

Subaru got it right in their “Share What You Love” campaign. They made a donation of $250 for each new vehicle sold or leased during the event to the charity of the participants choosing.

3. Focus on the charity

Tread carefully, readers. One way to ensure that your charitable giving campaign won’t be successful is to keep all eyes on your brand. Remember, it’s not about you; it’s about the cause! Repeat that like a mantra, and turn the spotlight towards the charity and their mission.

A great example of this is Coke’s #ReachUp campaign. They created a heartwarming video highlighting the events that take place during the Special Olympics. This video put the focus on the charity, and not Coke. The participants felt a connection to the video and therefore a need to share it.

You don’t have to go at this endeavor alone (and we recommend that you don’t). Bringing in an influencer from Instagram, a blog, a YouTube channel, a Twitter account, or even a celebrity can boost your credibility and your reach. If you’re wondering who to choose, see point #1.

Choose an influencer that not only resonates with your community and your brand but most importantly with the charity (remember, it’s all about them). If they’re not passionate about the mission, your audience will be able to tell.

Kellogg’s Share Breakfast campaign included a “celebrity dad” (Taye Diggs) who created a video of his own for the campaign. Your charity is also an influencer! The Make A Wish Foundation participated heavily in Disney’s Share Your Ears campaign, and the partnership was great for the campaign and the charity..

The proof is in the pudding (or in this case, in the shares). When your campaign is over, and you’re ready to report its success, make sure you can go back and count how many retweets, shares, or uploads were received. One of the most used platforms to track with is a microsite. By creating a separate space for the shares or uploads to live on, you can keep your information in one place and access it when necessary.

Subaru’s Share What You Love campaign is a great example of easy tracking. Subaru used a microsite that invited participants to upload a picture of them sharing what they love. This allowed Subaru to easily count the uploads to the site and get even more data from Google Analytics.

A microsite isn’t the only way to track shares! If you’ve chosen a hashtag to represent your campaign, we recommend using a third-party website (like Hashtracking.com or Hashtags.org) to help you count tags on Twitter or Instagram. If you’re using Facebook or Pinterest to share your message, count likes, shares (or repins) and comments on the original post. There is also third-party software to track mentions of you, your charity, or the name of your campaign.

What are your favorite charitable giving campaigns? Do you have more tips to run a successful campaign? Share them with us in the comments! 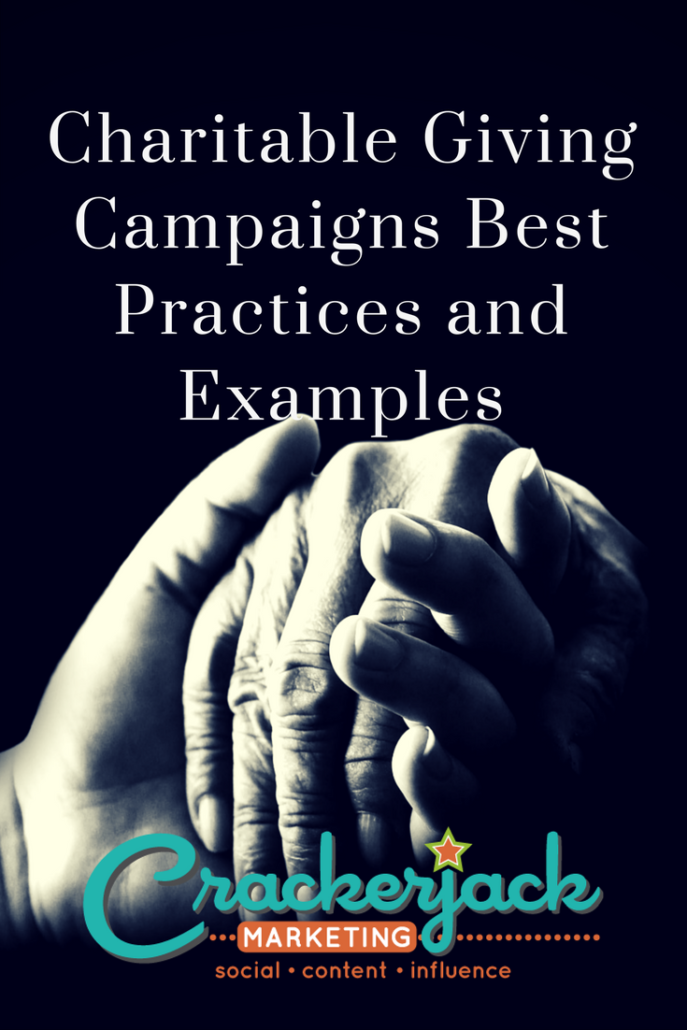 The Essential Guide for Startups Using Social Media
5 Things You Should Know About Facebook
Why Social Search Matters
Finding Your Brand Voice
Who Owns the Blogger Relationship?
Help! My 9 Year Old Wants To Be On Instagram!
The following two tabs change content below.